Welcome back to Denmark! It’s been 11 days since we first left Denmark on our Princess Cruise, and what a wonderful 11 days it was! The plan for the next two days in Denmark was that there were no hard set plans. We knew that we would be staying at Kokkedal Castle and that we wanted to visit two other castles and check out the fishing villages on the north side of the island.

Once we disembarked the cruise we headed to Avis to pick up the rental car for the next two days. Then, it was off to drive over the Øresund Bridge into Malmo, Sweden. The Øresund Bridge is a combined railway and motorway bridge across the Øresund strait between Sweden and Denmark. The bridge runs nearly 5 miles and is the longest combined road and rail bridge in Europe. Zeb saw this huge bridge from a distance at the beginning of our trip and wanted to experience it for ourselves. It was an impressive bridge but we were surprised when we reached the end of the bridge and learned that it was a $65 toll fee. Oopps! 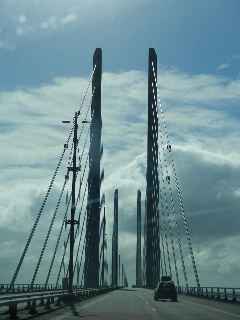 After the drive across the bridge into Sweden we headed north through the countryside to the port town of Helsingborg. Historic Helsingborg, with its many old buildings, is a scenic coastal city. The buildings are a blend of old-style stone-built churches and a 600-year-old medieval fortress in the city centre, and more modern commercial buildings. The streets vary from wide avenues to small alley-ways. We enjoyed strolling around the town as we killed time before our ferry left so we had a lovely lunch with delicious desserts and pastries at a local bakery. 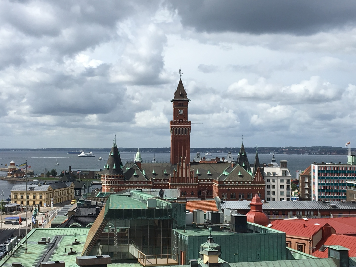 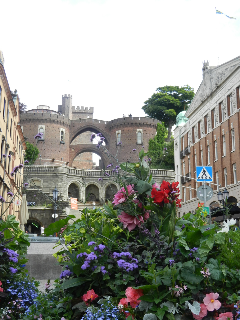 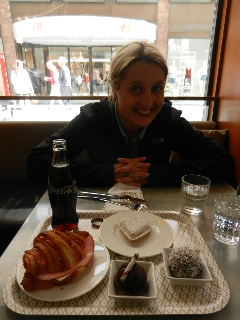 Lunch at the bakery in Helsingborg, Sweden.

After lunch, it was time to take the ferry from Sweden over to Helsinger. After the short 15 minute, 2 mile, ferry ride we were off to visit Kronborg Castle. 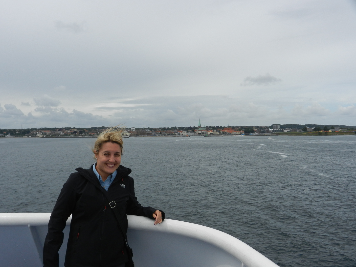 A little breezy on the ferry over to Denmark from Sweden. 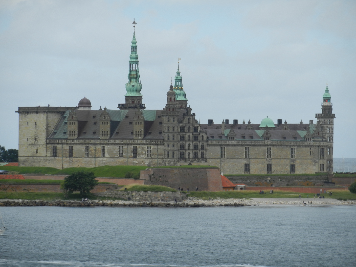 Kronborg Castle, about 45 minutes north of Copenhagen, is one of northern Europe's finest Renaissance castles. It is located at the entrance to Øresund and was built in 1574-1585. Kronborg Castle is probably the most famous Danish castle, known worldwide from Shakespeare's Hamlet. Frederik 2's Kronborg is at once an elegant castle and a monumental military fortress surrounded by considerable fortifications with bastions and ravelins. It has not been inhabited by the royal family since the late 1600's.

The castle houses collections of Renaissance and Baroque interiors, and among the main attractions is the 62-metre ballroom, the very well-preserved chapel and the mythological statue of Holger Danske in Kasematterne, below the castle. 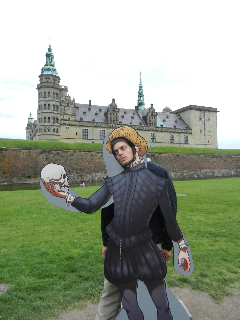 Having fun at the castle! 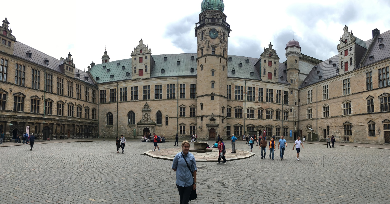 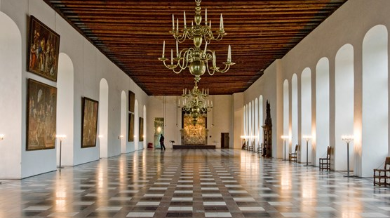 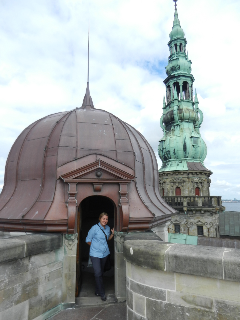 Atop the Kronborg Castle Tower 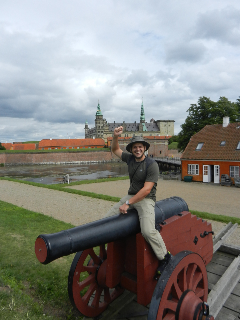 Zebby and his cannons...

After our busy day out and about, it was time to head to our castle where we would be staying for two nights. Kokkedal Slot (slot means castle)  is a former country house located in Hørsholm north of Copenhagen, Denmark for Queen Sophie Magdalene of 1746. Kokkedal Slot has a fairytale exterior, a stylish interior, and an amazing location set amidst a rolling landscape with forest, sea, beach and open meadows. While we were there it was a busy weekend for Kokkedal as it played host to a Finland vs. Denmark polo match, Koenigsegg car show, and numerous guests playing golf and enjoying the grounds. 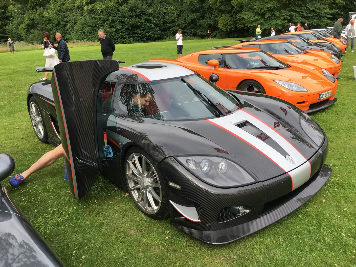 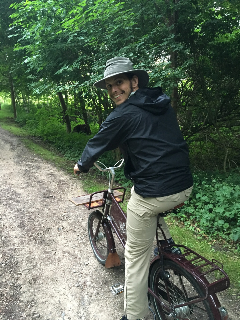 Riding through the castle grounds 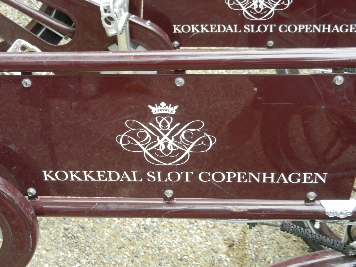 Out for a bike ride

Today, was a very busy day! We first started disembarking, drove over to Sweden, ferried back to Denmark, visited Kronborg (Hamlet’s) Castle, settled in at Kokkedal Slot, and had a lovely dinner at the marina in the nearby town. We look forward to more fun in Denmark tomorrow!